As open sourcing software is a strategic decision of Paylogic we decided not to make an exception for our development tools, in the hope that they are of use to the community. The code review tool is probably our most important development tool, so we decided to start with that. The Github repository can be found here.

Code review is one of the main pillars of the Paylogic development process. We have multiple projects ongoing, and none of the code changes can go into the stable repository without at least 2 code reviews. The last code review is done by a special company role - Gatekeeper.

We will reveal more about the gatekeeper process in later articles, but you can already see that code reviewing is a very important process for us, so the tool we use for it is important as well.

This article covers and explains the choice of the tool, its customizations, and the use case.

In 2011 we had to choose a code review tool, and after a thorough research rietveld seemed one of the best solutions for our specific needs:

So we decided to use rietveld. But we had to customize it significantly as our development process uses Fogbugz as a case management tool. This means that every change to the Paylogic codebase has a reference to a Fogbugz case, and the development itself is case-based.

The whole picture of our continuous integration will be described in later article(s), however there was a great talk at our PyGrunn conference on this topic from Dirk Zittersteyn. However, since it is important to understand the role the code review tool plays in our ecosystem, the below image shows a part of the process. 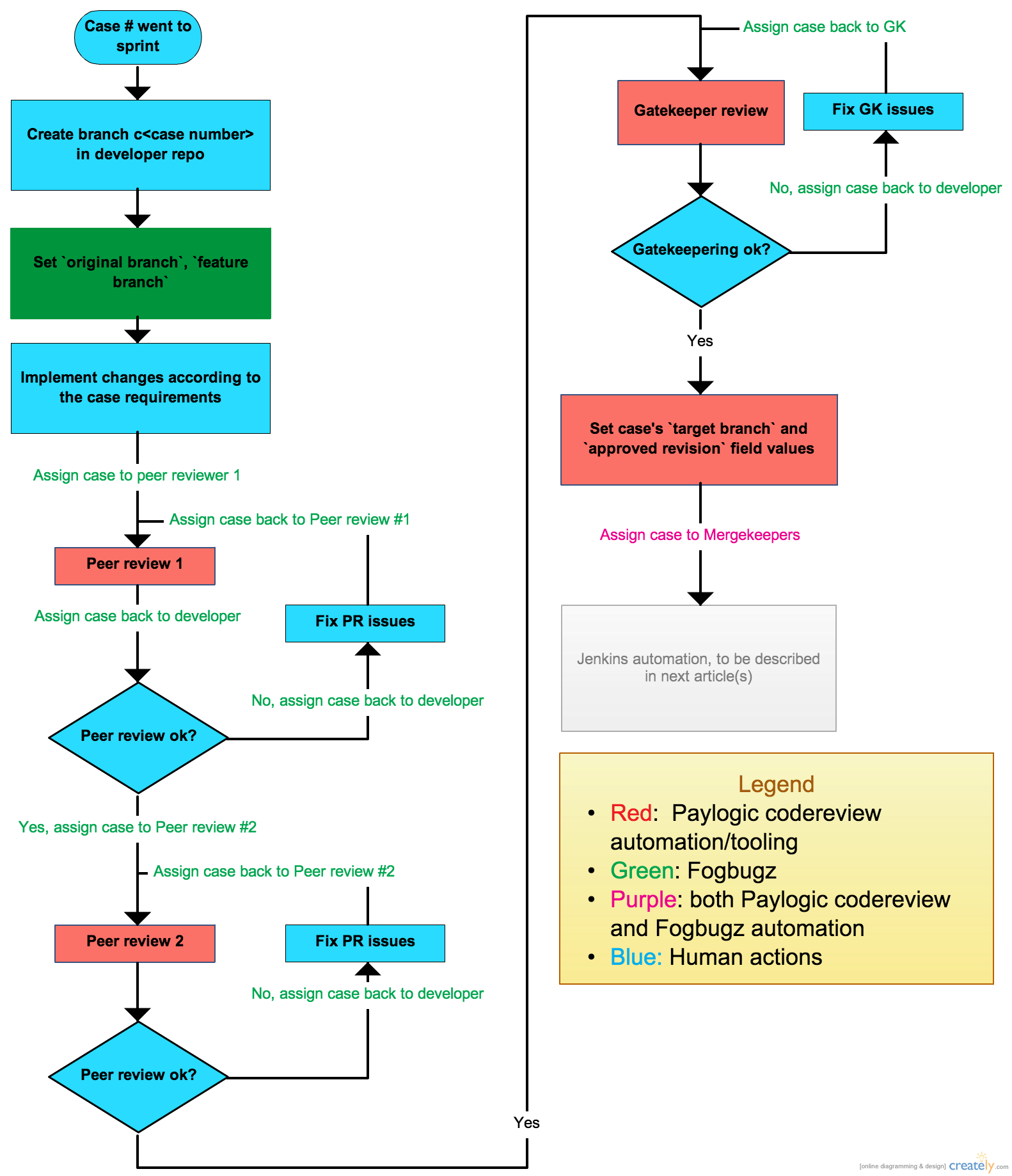 As you can see from the diagram (and the Legend), the code review tool is a critical part of our process.

Before we continue, we'll give you a quick glossary for the rest of this article:

With the customizations we've made to rietveld, we can now:

It's important to remove unnecessary additional user management responsibilities from our Operational IT team. And of course, from the user's perspective it's much less effort, as they can use a single corporate account to log in (we use Google Apps for Business)

This feature is implemented by creating a special endpoint on the code review tool which gets the case number as a parameter, and retrieves the following fields from that case through the Fogbugz API:

For custom fields, we use the Custom Fields plugin. From the Fogbugz side, it looks like this: 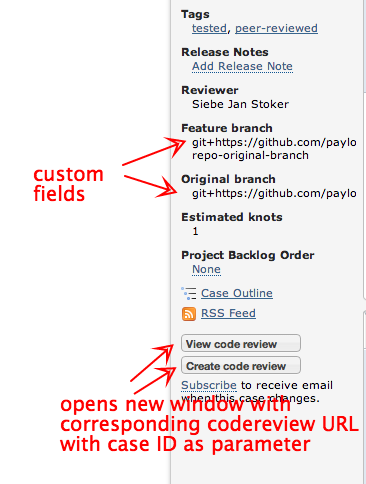 We implement some critical checks, where we for example don't allow the changing of certain non-editable files. If any of the validations didn't pass, creation of the issue (i.e. an additional patchset) fails and shows an error to the user.

Users with a special role can now approve a certain revision of the feature branch.

This is, again, implemented using a special custom field in Fogbugz called approved revision, together with the Fogbugz API to set it from the code review tool.

In the code review tool: 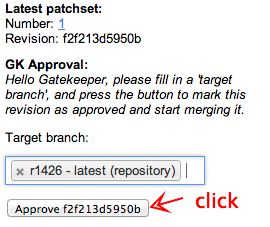 Both target branch and CI project are custom fields of a Fogbugz case.

In the code review tool: 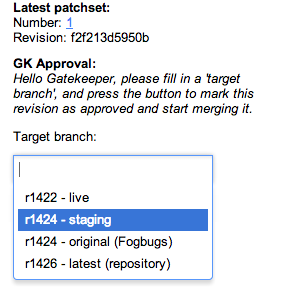 rietveld was developed specially for Google App Engine. It has lots of benefits for developers who don't want to bother with any OpIT related tasks. As we however have a strict requirement to host the code (and thus the code review tool) on our private servers, we used gae2django to deploy rietveld locally. What gae2django does is convert models that are supposed to be used with the Google App Engine datastore to Django ORM models. This allows us to deploy the application using relational databases such as (in our case) MySQL.

This was good enough for us, as up till now rietveld was using GAE DB (ext.db). But this is no longer the case. Now rietveld uses NDB for its models. And it's simply not possible to implement automatic mapping from NDB-based models to django ORM models because the difference is huge.

So currently, we are in the situation that we cannot receive any updates from the rietveld repository any more, so instead we have to support our fork ourselves. For now this is acceptable, but we are considering moving to a different code review tool.

Want to use it or to try it?

The readme on Github contains all the information required to set up the code review tool on your server. Don't hesitate to try it out. If you have any problems with installation, please create an issue on Github.

As was mentioned earlier, Review Board will probably be the replacement for our current solution. However, if we'll switch to git completely (which we haven't done yet) there are some other alternatives to consider as well, such as:

Any new tool we might choose will have to be customized in order to be an integral part of our development process. This new customization will be open sourced as well.

So regarding the code review, we've put all our cards on the table: from decision making to implementation, support, and use cases. We hope that it will be useful for the community. Feedback is, as usual, more than appreciated. Happy code reviewing, we wish you 0 comments on your reviews!