One of the challenges in the abstract world of code (and at the same time one of the most rewarding things you can do) is to visualize the work that is being done and that is left to do. Code is not like buildings that you can see rising from the ground, and not even like a book that you can count the pages. This makes it incredibly hard to gauge progress and view the status.

Luckily we live in a magical world where not only there is such a thing like code and computers to interpret it, but there are also people building awesome things with them to solve problems. One of these things is of course Paylogic, but another (and the thing that we will actually talk about here) is Trello.

In this article you will see how we at Paylogic use Trello, combined with custom tooling through the power of API's, to improve our development process.

The world was flat, and Paylogic only used FogBugz. If you're not familiar with FogBugz, it's a bug tracking tool created by Fog Creek that is fairly easily extensible with plugins. Back then, everyone got assigned a case at the start of the sprint, and you worked on your case until it was finished. When it was finished, you could ask for another case. Cases came from a single prioritized list, and were assigned by the team leader based on FTE's available and his estimations of hours of work.

So what exactly was wrong with this approach? Many things, but what I want to focus on now is that there was no way for anyone to get an insight in the progress of any individual case, let alone the sprint itself.

Sure, you could go to an individual case in FogBugz and see how many hours were registered on it, but that only helps you if you live in a fairy tale world where an hour registered directly correlates with an hour less work to be done. You could also of course talk with the engineer working on the case, but as he didn't make the estimate and because there was no structure for creating tasks, he often didn't really know what was left to do. As you can imagine, this led to many issues towards the end of a sprint, with cases not being finished and no-one knowing what was going on.

This approach evolved quite a bit before arriving to our current solution. One of the improvements was the introduction of the Kanban plugin in FogBugz, which allowed people to see in which sprint which case would be done. Definitely an improvement, but not yet enough.

Another was to simply use wall stickies. While this was nice and tangible, it also had its downsides. A burndown had to be drawn by hand (what are we, peasants?), and there was a bit of a barrier (however tiny) to get up, walk over to the board and create a card if you need one. This caused many fires (and other work) to be undocumented and as such invisible, which made controlling the sprint even harder.

And of course, by using stickies there was no log of past sprints, a huge downside as well. And it didn't scale. And stickies started falling off the wall. You get my point.

To quote from their site: "Trello makes it easy to organize anything with anyone". Luckily for us, it does indeed. We now use it for our sprint boards so that teams can register their planned work and progress, as well as for our backlog boards. I'll now go into some more detail on these boards.

A typical sprint board of one of our teams looks something like this:

Let's go through the columns (or lists in Trello's terminology).

Important to note is that the team itself is in full charge of this board. Not the team leader, not the SCRUM master, but the team. More complicated or cumbersome tools are often by necessity managed by a single person, which is actually a bad thing as the responsibility of owning and administrating the work (and commitment) is then not correctly distributed. Thanks to Trello being so accessible and easy to use, it is no problem to have the team be the owner of this as well.

After sprint planning, it's simply a matter of starting a task and moving it to Doing, actually doing the task, and when it's done, moving it to Done and picking up the next one. When all tasks of a story are done, the user story can be moved to Done in sprint (after creating a codereview for the Gatekeepers in FogBugz), and you can start work on another task. Easy as that!

There are a few other things worth pointing out about the sprint boards:

We have three engineering teams, so we need three backlogs as well. One such backlog board can be seen below.

As you can see, it is quite straightforward. There's a Backlog list, containing the user stories that are up next, and there is a list for each sprint, to be able to keep an easy overview of what was done in which sprint.

For epics, we use checklists in Trello to group related stories together. In that way, the epic can stay on top of the backlog while its individual stories are selected from the checklist and moved into the sprint. This works well in the case that you work on a single epic but also want to work on smaller, unrelated stories and features next to it, as you can then prioritize the entire functionality (which the epic encompasses) instead of just fragments of it.

The biggest advantage and simultaneous disadvantage of Trello is that it does just one thing and does it well. This means that if you ever want to do something else, such as generating a burndown chart, you will have to do it yourself. So, we did.

Fortunately, Trello has an excellent REST API, which makes it quite easy to get the data needed for a simple burndown. We started off with a burndown chart in Google Docs, which is a nice and lightweight way to start using Trello for your sprints. It turned out we needed a bit more flexibility however, so we developed our own burndown application, which can be seen below. 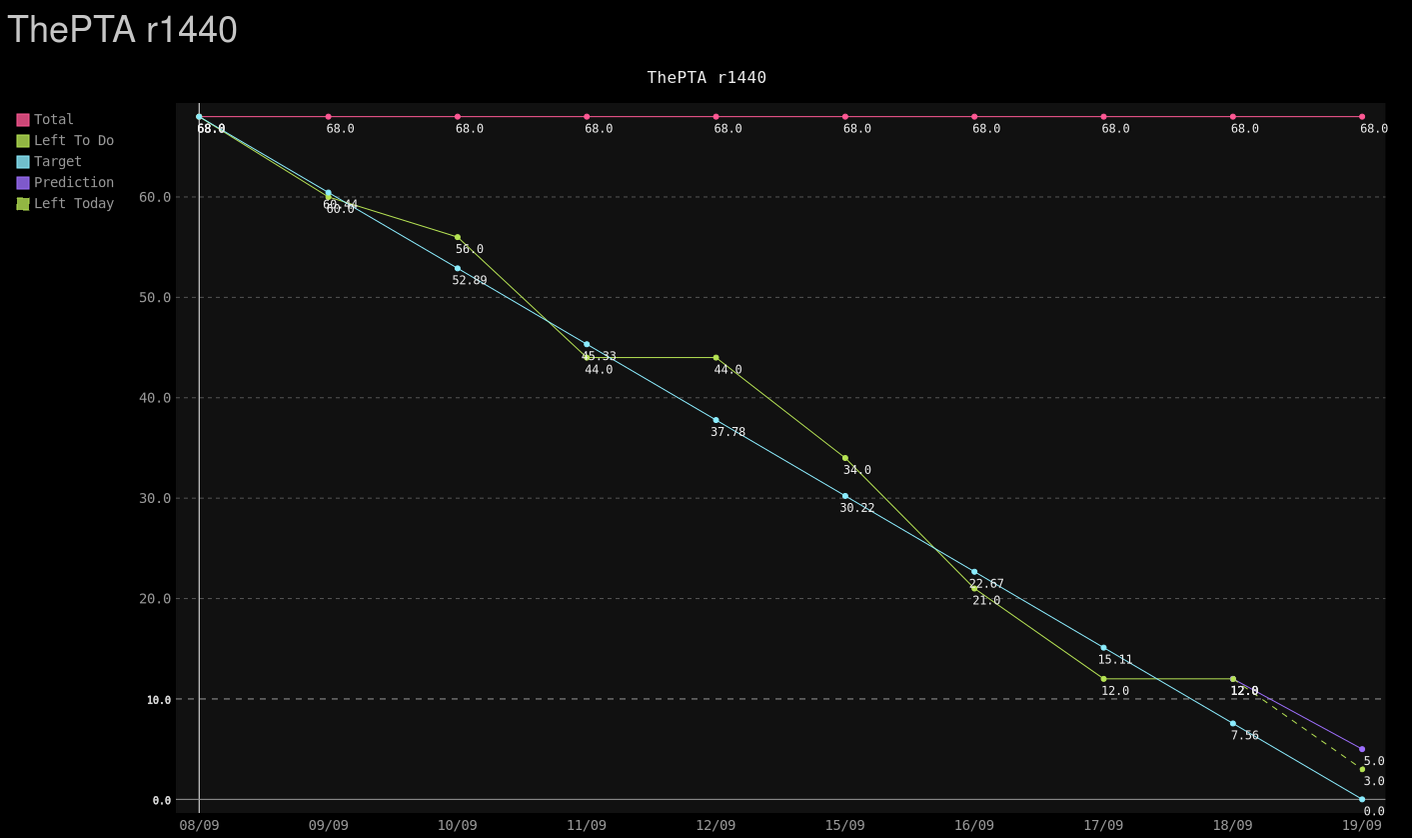 To be able to generate a burndown using Trello however, you need a way to set the size of a task, which we do by convention. Notice how in the sprint board shown above every task has a number of "k" between brackets, so like (2k)? That's our convention for setting the size of the task, which is of course trivially parsed.

Thanks to the fact that we track everything based on tasks, and because our tasks are as a rule no larger than 4 knots, our burndown is enormously detailed and fine-grained, and as such gives you a very realistic view of what the progress of each team is on every given moment.

Another thing that Trello doesn't have is time tracking. There is a Chrome extension to allow time tracking in Trello using Harvest, but the thing is we don't use Harvest; we use Fogbugz. So we developed and open sourced a simple synchronization tool for that.

What it does is it periodically looks at the task a member has in the "Doing" column, finds the case corresponding to that task in FogBugz, and starts registering hours for that user on that case (using FogBugz's less than awesome API). It's not ideal, but it works for us, and saves our engineers the hassle of having to do double administration.

Of course, being resourceful engineers, we integrated this information then again with our burndown chart, so that we could display what every engineer is working on right now next to the burndown chart, together with the progress of the case. Magic! 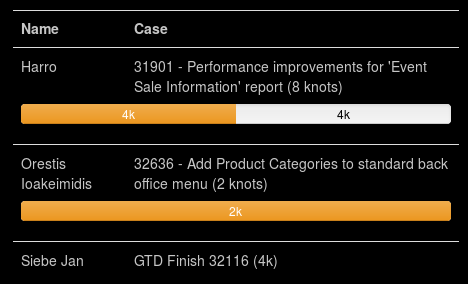 So that's in a nutshell how we use Trello for our sprints. We've been using it for our sprint boards for nearly two years now, and it definitely has stood the test of time. We've been using it for other things as well, such as for project management (for which the calendar view is quite useful), as Kanban board for our Operational IT team, and for storing code snippets. The fact that there is Google Apps integration is quite a bonus for us as well (although that is only part of their paid business class subscription).

Now it has to be mentioned that there are many other tools out there that attempt to solve all of our problems in a single tool. This would of course be better, so that we wouldn't have to develop and maintain our custom tooling. However, I personally haven't found one that I liked as much, and that allowed the same flexibility, as what we have right now. For example, many tools that I found don't allow you to generate a burndown based on your tasks, only of your user stories, which in my opinion is a serious limitation. If you do have a tool that you can recommend, please shoot me an email or leave a comment.

Oh and there is of course a Chrome plugin called Scrum for Trello. When we looked at it, it sadly wasn't very mature yet and it didn't fit our needs, but it does look pretty good now. Someone also pointed out Plus for Trello to me which I didn't know about before, but it looks promising as well. Give it a go!

And don't forget to check out the taco game.